Coaching was the best choice

After a career as a player, Petri Matikainen thought that he would leave the hockey world. However, his career as a police officer remained short as a spark for coaching was ignited.

Petri Matikainen, who is a professional coach in Austria and has celebrated the Central European Multinational ICE Hockey League championship in the previous two springs, is one of the best-known Finnish hockey coaches of the 21st century. In his home league, the Finnish Championship League, he was awarded Coach of the Year twice, in 2008 and 2011. There is also the 2011 World Championship trophy in the prize cabinet, which Matikainen won as the Leijonat ("The Lions") assistant coach.

A lesser known fact about Matikainen is that before his coaching career, he worked as a police officer for a while. So Matikainen is a career changer, on two occasions, to be precise. Prior to applying to police academy, he pursued a career as a professional hockey player. His career as a player ended at the turn of the millennium.

One could imagine that moving from the rink to behind the bench was Matikainen's plan towards the end of his career on the ice. However, that was not the case, he says.

– I thought that when my career as a player ends, that will be it for hockey, Matikainen recalls and continues:

– My own boys played in the Tappara juniors. I looked through the plexiglass and wondered if this could be done in another way. I went to ask the coach if I could get out on the ice and help. That's when the spark ignited. I got to know myself and found that helping the boys is great. I became interested in the world of coaching and I applied to Vierumäki for an English-language coaching program. If I hadn’t started coaching the boys back then, it could be that I would have been a police officer to this day.

The law enforcement profession helped with his coaching career

Although Matikainen worked as a police officer for only about 1.5 years of training, he liked police work.  The police academy, however, taught many skills useful for a coach as well.

Coaching was the winning choice

– The police academy is a demanding and good education with many different aspects. Speaking, performing, the physical side, different techniques, ethics, and studying the law. The work of a policeman is largely about working with people and solving problems on a daily basis. Much the same as in a coach's job, Matikainen says.

From the point of view of working conditions, however, the work of a coach and a policeman are almost opposites. If Matikainen had continued his career as a policeman, he would have received a permanent post, a secure monthly salary and a permanent place of residence. In the ruthless world of professional coaches, permanent posts are a foreign concept. Even if a coach signs a multi-year contract, there are no guarantees that it will be completed.

On the other hand, the police profession also provided the confidence to pursue a coaching career.

– Becoming a professional coach is like jumping into the deep end. One cannot know what kind of career it's going to be or whether one will enjoy the job. I felt it was important that I got a good professional qualification and I am really proud to have qualified as a senior constable. It was a safety net I could have dropped into if I had needed to.

The ruthless world of coaching as a profession

It was not difficult for Matikainen to change from policeman to coach. The world of professional sports was already familiar from his own years of playing professional hockey. He suspects that a steady “nine-to-five” job might not have motivated him over the longer term. As a coach, the pressure is constantly present. 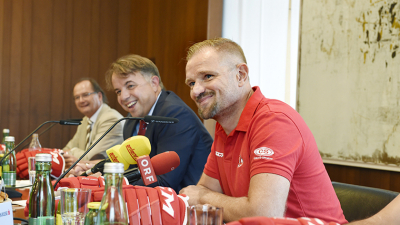 – One must constantly strive to develop oneself and the environment to be able to continue. If big companies like Nokia publish their interim reports four times a year, I feel like we do it three times a week (matches). This is a really short-lived and precarious job and certainly not for everyone.

Matikainen describes coaching as demanding work. The team must be made to work for the common good, but at the same time the players must be able to develop as individuals.

The life of a coach is demanding also from the perspective of the inevitable facts of life You have to be ready to move for work, sometimes also abroad. Matikainen's current job is the second one in Austria. In addition, he has coached in Russia and Slovakia.

Before leaving for Russia, Matikainen coached in Finland for nine years and felt that he wanted to see other puck cultures.

Professional sports are largely a work of passion. Matikainen also says that he considers it important that the team's attitude does not change to "just a job”, but that hockey is everyone's passion. The downside is uncertainty, as coaches and athletes are temporary workers by the standards of more traditional working life.

Ultimately, however, hockey coaches are employees who make employment contracts the same way as, say, the policemen. Among other things, Matikainen has received help with employment contract matters from YTY's member association SAVAL. He joined the union in 2003 when he started as a professional coach in Pelicans A-juniors. Matikainen has been in contact with SAVAL almost every year.

– I have asked for advice on various problem cases and legal issues. For example, about what documents I need if I return to Finland from abroad.

Matikainen describes SAVAL as well-informed, and says that he has always received the help and information he has needed at any given time. Matikainen has received help specifically as an individual. It is more difficult to promote the interests of the diverse profession of professional coaches collectively, for example in terms of working conditions.

– I have found membership important. SAVAL has older professional coaches who have been involved in sports. This way it is possible to receive peer support. When I call SAVAL, we talk a lot about coaching on a general level. For me, membership is more than just belonging to a union that advocates for the interests of a certain group. SAVAL is a very family-oriented union.

Does it payoff to be a member or to become one?

YTY's winter festival for the whole family in Talma 8.2.2020